Amazon has upgraded its Fire 7 tablet

The new Fire 7 comes with 16Gb as the minimum RAM with 32Gb being the next upgraded option.  The storage can be upgraded via MicroSD cards to a maximum of 512Gb!  Onboard is an upgraded processor running at 1.3Ghz.

Pricing starts at $49.99 for 16Gb with Special offers enabled (Amazon adverts) with the price increasing to $69.99 for 32Gb or RAM.  If you are a long-standing Prime member you can contact Amazon and they may remove the Special offers function, if not expect to pay a premium to purchase the tablets without this functionality – $64.99 for the 16Gb, $84.99 for the 32Gb model.  The Fire 7 tablets are Alexa enabled.

Amazon has its own folding case for the tablet as an additional accessory.

This costs $24.99 and is also available for pre-order right now!

You can pre-order the new tablets now – they are released June 6th.  If you order now Amazon also includes a $10 credit for the Amazon App store to spend on new apps or in-app purchases.

Echo Buttons, you have probably seen them around Amazon and immediately think of playing games on your Alexa devices.

Echo buttons can also be programmed to run Routines that you set up within your Alexa app.

For example, I have set my Echo buttons up for morning and night routines.  For morning I have a button that switches on my coffee maker and also adjusts the temperature on the downstairs thermostat to bring up the temperature for when I head downstairs,  My night routine shuts down the house, it turns off all of the lights in the house, ensures the front door is locked and then lowers the thermostat temps for the night as we’re all snug in bed.

Setting up your Echo Buttons

Getting started with Echo Buttons is easy and awesome, once you take them out of the box simply tell your Alexa device to setup your Echo Buttons – ‘Alexa set up Echo Buttons‘  You can then remove the plastic tab from the bottom battery cover and then press your buttons in turn to be added to your Echo device.  Simple!

Setting up Routines with your Echo Buttons

You can set up Routines via the Alexa app.  Tap on the menu on the top left and select Routines.  You can then hit the + on the top right of the screen to create a new routine.  Once you do this you have to define two things – When this happens and then Add Actions.

Adding actions gives you a ton of interesting options.  You can control and adjust your smart home devices, set/change do not disturb, volume settings, stop Audio, send notifications or announcements, play music, news or traffic announcements.  This is ideal for setting up say morning or evening custom routines that can greet you, tell you the weather and traffic for your morning commute and kick in devices like your coffee maker so you’ll be all set to walk out of the door!

Check out Echo Buttons both for games like Beat the Intro from Musicplode, Dungeon Escape, Trivial Pursuit Tap, and Sounds Fun with Mike Epps from Ground Control.  You can also ask Alexa ‘Alexa, what games I play with Echo Buttons‘

You can then enable the relevant skills to start playing the games!

Introducing Echo Buttons, a new way to play games through your compatible Echo device
Each button illuminates and can be pressed to trigger a variety of play experiences powered by Alexa
Bring back game night with a catalog of compatible Alexa Skills such as Trivial Pursuit Tap by Hasbro, Hanagram, Button Monte, and Sounds Fun with Mike Epps. Just ask "Alexa, what games can I play with my Echo Buttons?" 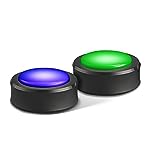 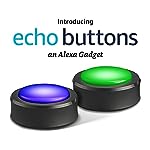 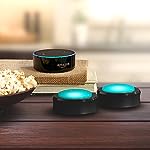 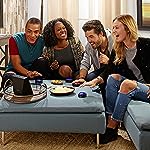 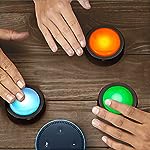